I recently started collecting vintage loose Star Wars action figures and soon I started to run out of space in my closet. While they didn’t look bad in the closet, I was questioning the point of collecting one hundred or so figures if they are going to be hidden behind a closet door all the time.  I also didn’t want to have to worry about dust so I started thinking of ways to keep them clean, but viewable. 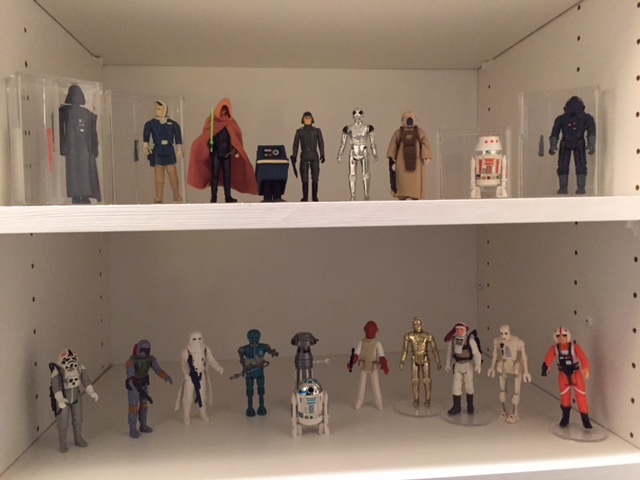 Inspired by the awesome cabinets of figuredisplay.com and members of the Vintage Star Wars Facebook Group  I decided to build my own cabinet to display my loose Star Wars Vintage collection.  I did seriously consider buying a cabinet, but wasn’t prepared to spend the money.  I also wanted a cabinet that didn’t look that Star Wars themed.  I modeled it after the decor of the house which is basically white moldings and pretty simple design.

The display itself is pretty simple and cheap to build. The size of the cabinet was defined by the size of the acrylic plastic I found. My goal was have about 8 shelves which could display 10-14 figures per row.  Not including variations, you need space for about 100 figures if you want to display the four vintage lines from 1977-1985 .

While this is not a complete list of tools, not all of these are necessary. It depends on how fancy you want to get. I’m not a huge fan of Harbor Freight tools either, because most of their stuff is low quality. However, the items I linked to here actually are a great deal and are highly rated and worked very well for me.

When selecting your pine stock, you can try to get the lower grade (cheaper) wood, but ensure it is straight and not warped. Rest it on a flat surface to ensure you won’t have any issues with squaring up the cabinet doors or cabinet.

The total cost of materials to build this cabinet is around ~$100 USD, not including tools. While the instructions below should help, they are by no means 100% complete. This article is meant to inspire and give you ideas on how to make your own cabinet, that will hopefully be better than the one I built!

Start by making the front window for the cabinet. I had to pick through about twenty pieces of acrylic plastic at Lowes to find one that was not damaged. Most had cracks on the sides or the protective wrapping was gashed. Whoever handles the stock must be a caveman. Using the size of the acrylic plastic as your guide, miter your 1×2″ at a 45 degree angle. I made the inside edge a 1/2 inch smaller so that when I cut the slot, in the next step, it would slip into the slot.

After you cut the 4 pieces, use the slot bit cutter to cut a groove into middle edge of the trim. Since the blade is rather large, the tools manufacturer’s recommendation is not to use a router that goes above 16k RPM. If your router is single speed (like mine), then buy a speed control dial like I have linked above. Ensure that after you cut the pieces and before you glue and nail the ends that the frame is a perfect square. Do this by measuring diagonally from each corner and ensure that the measurements are the same. Use the band clamp to clamp while the glue dries, but don’t over tighten as it will bow the wood. I used a brad nailer to tack the pieces together until the glue dries the next day. I also left the plastic film on the acrylic so I didn’t have to worry about damaging. One tip is that you might want to paint the slot so that it is white inside. I didn’t do that, but if I had to do it again… 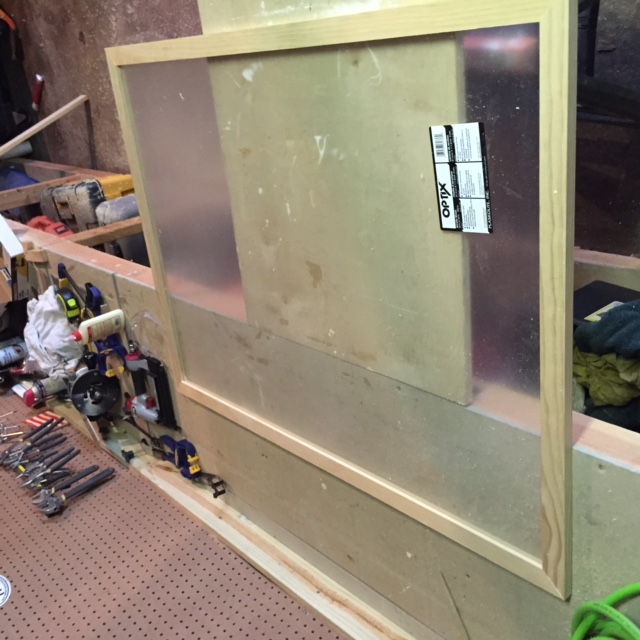 The frame is basically just 1×3″ mitered at the ends. In order for the plywood backing to sit flush, use the slot bit about 1/16″ from the base to cut a notch. It essentially is being used as a rabbet router bit. Be careful to ensure it doesn’t hit the router base though, but try to get it as close as you can. You might have a slight paper thin, sliver of wood left after you complete your cut that will easily come off with a razor knife.

Since you are using two pieces of birch for backing, think about where the two pieces meet. What I did was create a template block and marked the locations of my shelves on the cabinet frame. I then cut the piece of backing so that the joint would be behind the middle shelf so there would be no visible seam. The height of my shelves were 4 7/8″ but don’t forget to include the width of the shelf as well (3/4″) when you start tempting the positions. You don’t want to go much lower than this or IG-88 won’t fit! Also, if you plan to run lighting inside the cabinet, drill holes in the back corners of the shelves so you can run a wire later. I didn’t want to have to deal with a plug, so I purchased a battery operated string of LED lights .  Don’t expect it to provide a ton of light, but it does give it a nice ambient glow.

Since the backing is flush to the back, a 1’x3 shelf will protrude slightly. You can either cut the shelf down by about 1/4 inch and make it flush against the frame (easy to do if you have a table saw). I opt’d to create a little router jig and using a straight bit, cut out about 1/2″ from each side. Here is picture of the jig I made. Just measure from the end of the router bit to edge of your router fence and add the amount you want to cut. Test first on a scrap piece! This allows the shelf to almost butt up directly to the window without a gap. 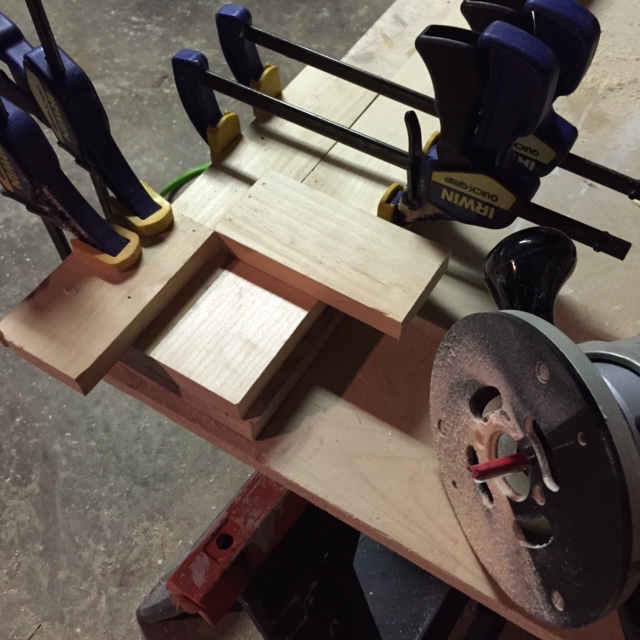 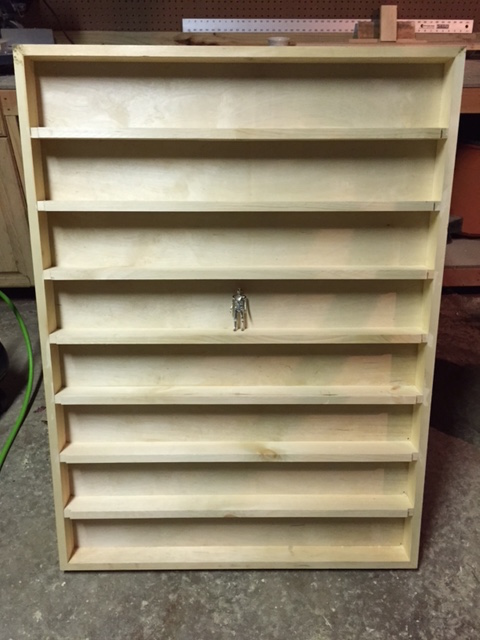 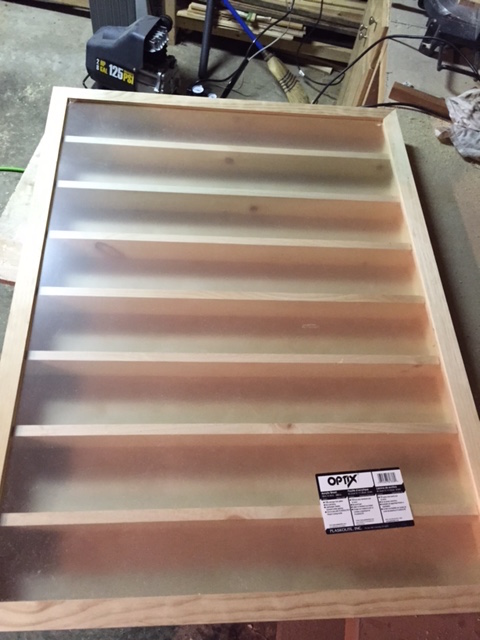 To attach the front window to the cabinet I simply used two screws plus some strong magnets glued in along the frame. The weight of the window frame rests on the screws while the magnets hold it tight against the cabinet frame. 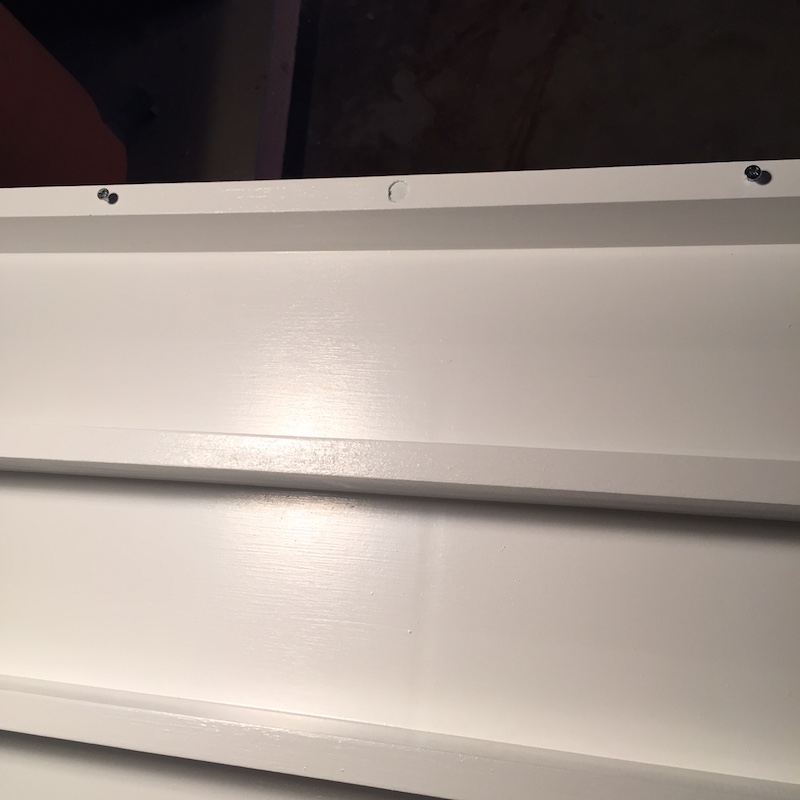 To mount to the wall, I used a 22″  Z-Hanger  which allows you to catch two studs on the wall and easily mount the cabinet on the wall while still keeping it relatively flush. There will be a 1/4″ gap at the bottom so just use a filler piece behind the cabinet to keep it flush.  This z-hanger I bought from Home Depot actually has a built in level which is pretty cool.  If you want to just screw the cabinet directly into the wall, then make sure your design has a backing block at the top so you have some meat to to drill through and mount into the wall. 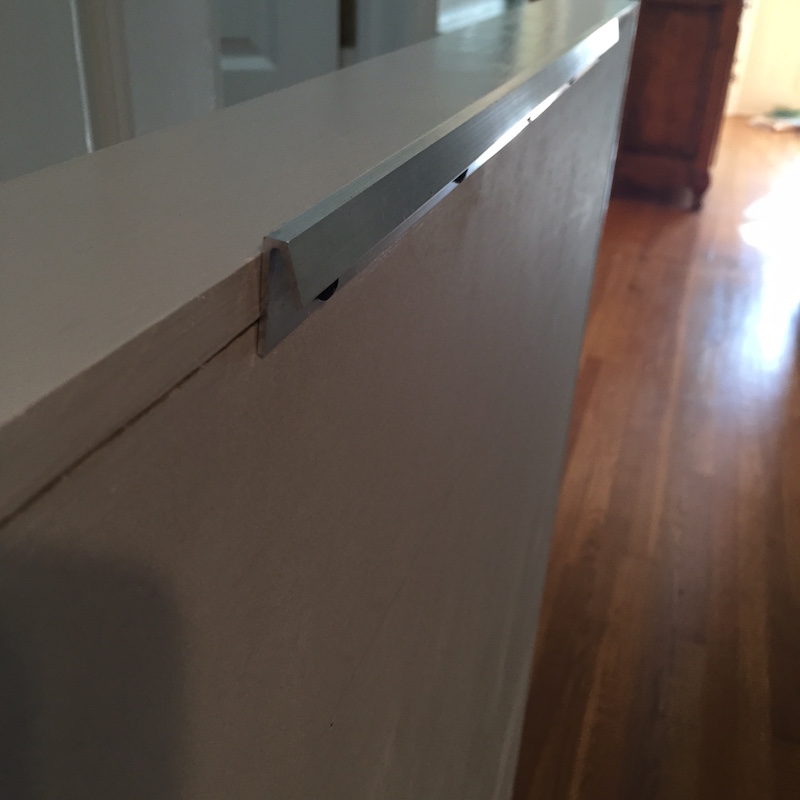 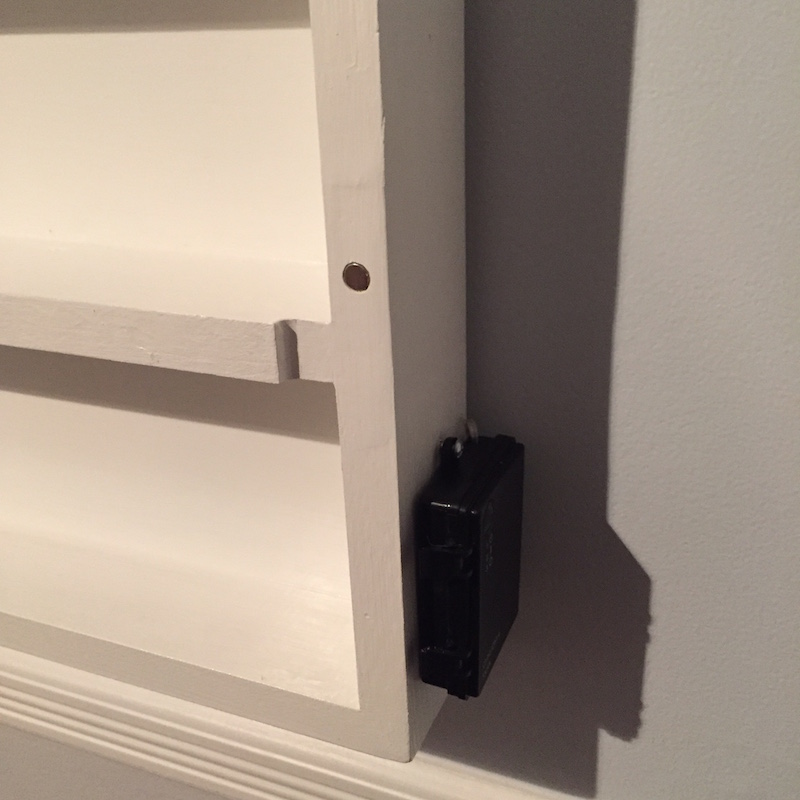 This is the battery pack for the LED lights that is hidden on the wall side.  You can also see one of the magnets that flush mounted into the cabinet frame.  On the oppose side of the window is another magnet. 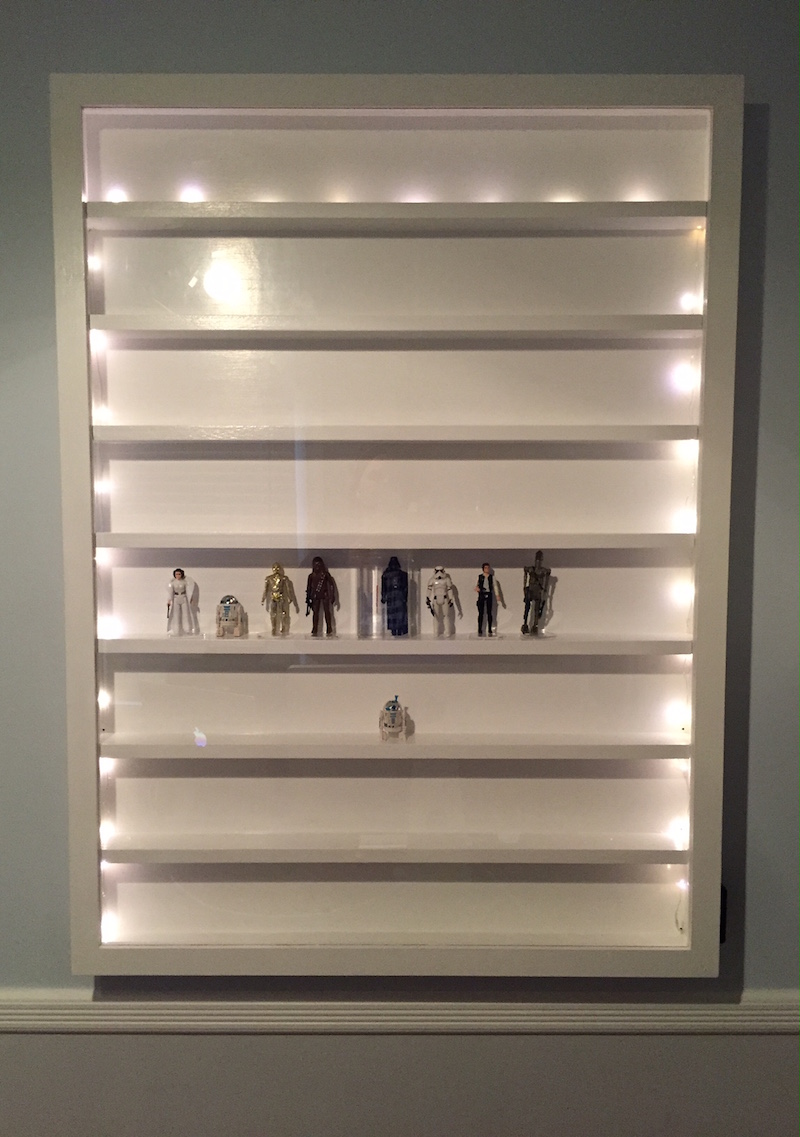 The finished cabinet that needs a lot more figures 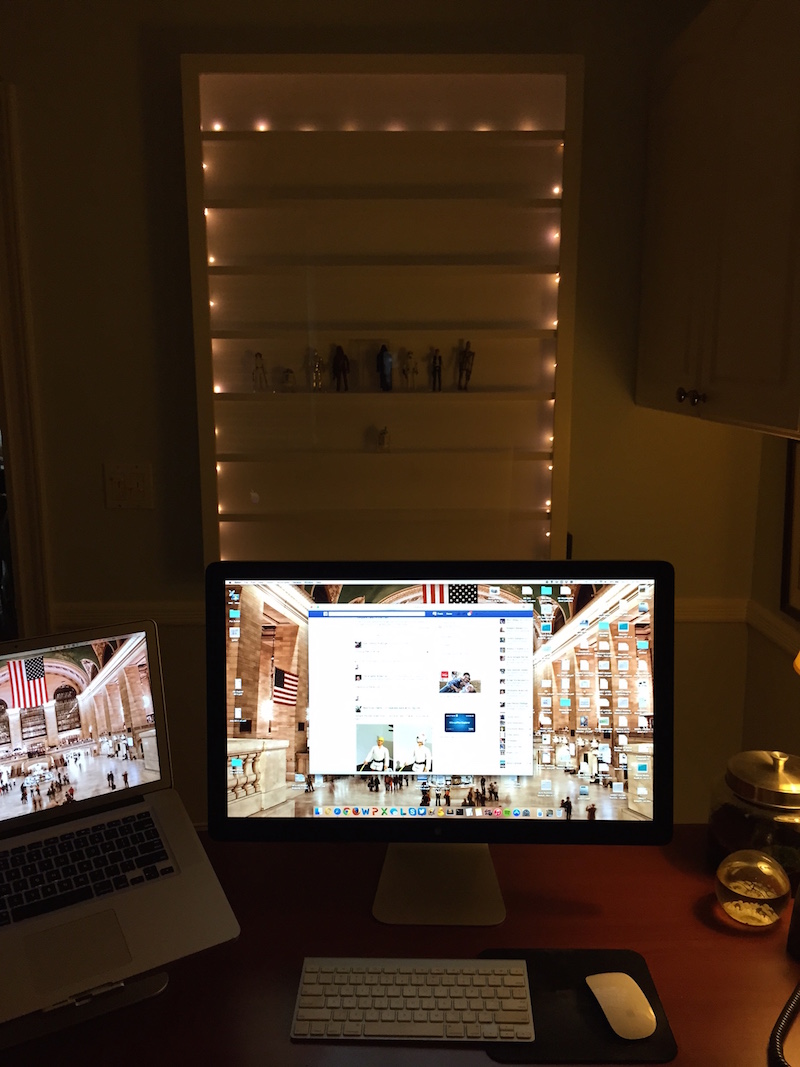 My view of my display as I work 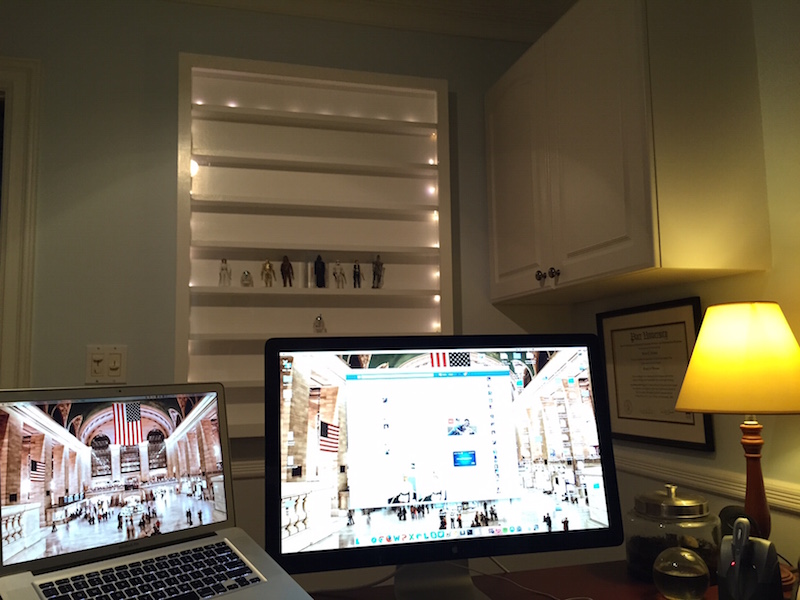 I’m not going to lie, I spent a lot of time planning, designing, building and painting this piece. I didn’t track the total number of hours spent, but I finished it working on and off in about two weeks. If you like using your hands, then this is a fun project with the byproduct meaning an awesome display for your figure collection. Good Luck and contact me if you have any questions!