Update 12/30/2021 : 25,315 cups brewed. Started randomly getting a BREW UNIT MISSING message. It would work sometimes if you really pushed in the brew unit and then finally wouldn't work at all. There is relay switch (XCG5-81-PS or XCG5-81-P5) with a gray lever that the brew unit pushes into to signal the unit that it's attached. The gray clip broke off the relay. To fix, I didn't replace the relay but simply connected the yellow and black wires to the two closest pins which basically simulates the button pressed. To get at the switch you need to: take the top cover off. Open the front door and remove the grinder. Lift it out the grinder assemble to the side. You'll need to remove a green wire, move the circuit board above and remove the sliding levers. Next loosen the various screws around the brew unit switch and gently push the plastic housing and you should see the relay switch. Another alternative is cutting the yellow wire which should fake the switch being closed.

Update 6/14/2021 :  About 23,849 cups brewed.  Machine was descaled but seemed to get stuck in RINSING MACHINE mode.  The fix is to hold down large coffee + small coffee + hot water and turn the machine ON.  This will bring up the menu.  Scroll down to Descaling.  Click enter and that will switch it OFF and out of DESCALE mode.

ALSO, after descaling, it was still getting stuck in EXPEL AIR messages and the hot water and steam barely worked.  I ordered the same pump as below, replaced it and it’s working fine again.  The first pump made it 18k cups but the second only lasted about 5.5k cups.  At least it’s an easy fix and the pump is only $22 on Amazon and cheaper than the first time time I purchased a pump in 2018.

Update 9/13/2018 :  About 18,000 cups brewed and the machine stopped pushing water out.  It was making a sputtering sound and lots of steam.  I did the typical descale and cleaning cycles but it didn’t help.  Using the service manual, I did the pressure test and it showed there wasn’t any pressure.  I ordered an Ulka Model E Type EX5 water pump on Amazon for $35 dollars and that fixed the problem.  To replace the water pump, you have to take out the coffee machine, remove the top cover (only the top cover) and then you should see the water pump.  Remove the blue and white wires and note which one goes where (blue at bottom).  Also note the sensor that snugly fits above the wires.  I think that some sort of motor sensor (rpms, temp?).   The water pump is secured with two rubber mounts which you can only be removed from a screw at the bottom (impossible to get to).  The way I removed it is popped off the hose on the side closest to the water tank.  I then was able to slip it through the rubber grommet which only left the other side to be freed.  The side with the brass shaft can be unscrewed by holding the solenoid and gently turning the pump.  Once freed, you can replace in the reverse order.  One other issue I had was the hot water stopped working.  I removed the front cover and somehow the brown wire broke in half!  I think all the open/closing of the door caused it to wear.  Simple solder/patch fixed that issue too.

Update 1/3/2016 :  One issue I have been having is that behind the brew unit, there is a little cavity that constantly would fill up with coffee sludge.  This is basically where the inside of the coffee machine meets the brew unit.   To clean,  I would get a paper towel and wipe out the water and coffee grinds.  What I didn’t realize until now is that it’s actually suppose to drain down below and ultimately into the drip tray.  Simply get a pipe cleaner or something bendable and at the far left (you can see it), poke around until the water flows freely.  I used a turkey baster to shoot water in which also helped remove the blockage.  Miele doesn’t say to clean this in the maintenance schedule, but I would recommend doing it every time the unit needs a descale.

Update 12/25/2016 :  Just a quick update.  13k cups brewed and going strong!  If you are in need of parts, the Saeco Vienna Plus shares the same parts as this Miele CVA615.  Here is a detailed parts diagram and an online place to buy parts .  Additional part diagrams .  Just be careful and try to match it up with the original Miele part.

Update 11/19/2014 :  We are over 10,000 brewed cups and some “brewunit block” issues have been coming up.  Before you panic, do the descaling and rinsing maintenance and then thoroughly clean and lubricate the brew unit.  I believe a sign the brew unit needs maintenance is when it does the System Test and you can hear the motor strain.  I’m still having issues with water leaking behind the brew unit (ultimately into the drip pan) I might buy a new boiler valve and replace it.  The Miele parts are shared with the Saeco Vienna which you can find online.

Update 5/7/2011 : After about 4000 brewed cups we started noticing that the well behind the brew unit was filling up with water [which is normal], but there were grinds everywhere. To fix it, you should make sure you run the descale process and the rising cycle. The rising cycle is key in removing any oils that have built up in the brew unit. Additionally, replace the boiler valve o-rings per your owners manual. I had to replace the brew unit o-ring [called #4] as well. I ordered it from Miele for about 15 bucks and it’s part number: 5049900 I also found the service manual online so posting it here as well: Miele Service Manual [6mb]

I just noticed the Miele CVA 4075 model features a plumbed-in water connection. Don’t you hate it when they improve products after you purchase them?

Our system is still working great and we have had zero problems. We’re up to 518 cups. The only issue I have had is that someone, who shall rename nameless, was not emptying the grinds when the water was refilled and there was a slight overflow problem.

We recently redesigned our kitchen and we thought a coffee center would be a cool addition. There really isn’t a lot of choices in wall mount units so it was either the Miele system that used coffee beans or pods. I didn’t like the idea of pods since they are more expensive and would have to be special ordered. The CVA 615 system I decided on uses regular coffee beans that you can find anywhere. 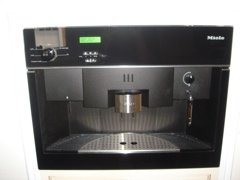 We had our Miele installed in the middle of the wall by our pantry. We also had a custom draw built to go under the unit to hold coffee cups, tea bags, sugar, etc. The idea was a coffee station. 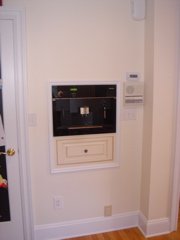 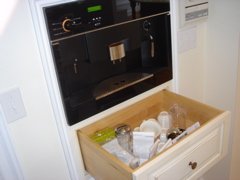 To be honest, I’m not a coffee aficionado . I probably couldn’t taste the difference between a hot cup of fresh coffee from 7-11 vs. Starbucks. Ironically, I mainly like to drink tea that I steep myself. A lot of the tea I use recommends steeping at 212 degrees F. From doing a test, it looks like the max temperature the hot water is about 160 degrees F. 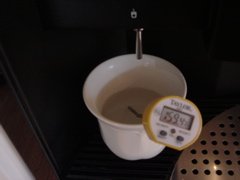 The water definitely comes out hot, but not boiling. I made tea quite a few times and really didn’t notice the lower temperature so it works fine for me. If I had to, I guess I could microwave it for another 30 seconds, but that kind of defeats the purpose. Unfortunately, there doesn’t seem to be a way to adjust how hot the water comes out.

For coffee, there are a few temperature adjustments. To be specific, there are 5. At the “medium” setting, the coffee comes out at around 175 degrees F. I couldn’t imagine any hotter than that, but coffee gurus would know more than I as temperature affects the crema. 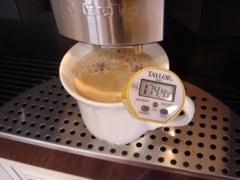 As you can see, the coffee comes up with a nice froth and crema on top. I think it tastes great and that seems to be the consensus of everyone else that has tried it. Of course, once you see it working, it’s hard to believe the coffee wouldn’t taste great. I’m really happy with the unit so far and hope it gives me many years of trouble free coffee.

I don’t know of any other reviews of this unit on the web so if you have specific questions, leave a comment and Ill try to answer.